Understanding the importance of investing in research and innovation has given Global a completive edge, allowing us to offer proven techniques that save our client’s time and money while providing the best possible results.

Over the past ten years Global has either initiated or played a major role in over 16 research and applied research trials throughout Northern Alberta, the majority of which can be applied directly to linear restoration.

U of A Retrospective Study Confirms Global’s Restoration work. 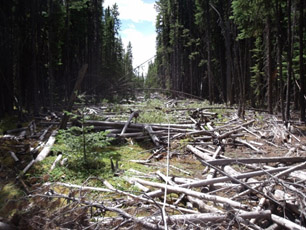 Little Smokey Caribou Restoration Project; This was the first linear deactivation pilot project in Alberta. It was developed to look at a number of techniques that had the potential to reduce caribou and wolf encounters. Global provided both technical and operational support for the project which was completed in the spring of 2006.

The summer of 2011 Global was hired by the U of A to collect technical information on our previous work for a retrospective study which was released later the same year (Evaluation of Forest Reclamation Efforts on Linear Corridors of the Little Smokey). Most of the deactivation and site preparation techniques used on the project were validated in the retrospective study; they are now being applied throughout Alberta and British Columbia on similar programs.

It has taken 9 years, 100’s of recipes, multiple trials and hundreds of thousands of dollars to perfect the concept.

Global’s seed puck is expected to save the reclamation industry millions in reclamation and reforestation costs. 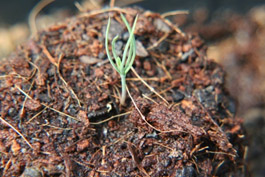 Research on the seed puck began in the spring of 2007 at Woodmere Nursery in Fairview AB; it was there that the shape, size and main ingredients were first formulated and tested. Our research on the product was moved from Fairview to the Canadian Forest Services Edmonton AB (A Federal Research Institute) in 2013. Product testing and moisture enhancing techniques have been the main focus at the Edmonton research center. 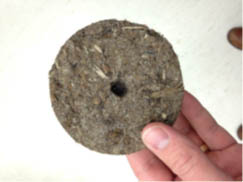 The last field trial before we move to commercialization is being conducted by Canadian Forest Service; the trial is testing our seed pucks on three types of moisture regimes; wet, medium, and dry. Included in the trial is Global’s patented, moisture retaining shell. The seed pucks were placed in the late winter / early spring of 2017; results of the trial will be published in a research paper later this year or early 2018 and will be posted on our website.

While working on the first caribou restoration project in 2006 the project manager Brian Coupal asked what we all though was a crazy question. “Has any one ever tried planting trees in the winter?”

A consortium was formed five years later to answer Brian’s question; Tim Vinge and Doug Kulba with the Alberta Gov, Dave Larsen with Global Restoration and Jeremy Reid with the Oil Sands Leader Initiative. The consortium thought it best to ensure the trial was scientifically valid so Grande Prairie College was approached; the College was excited to be involved and supplied, Weixing Tan, PhD, RPF. 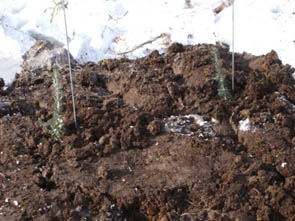 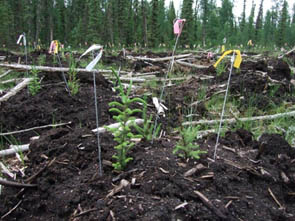 A paper was produced the following year by Weixing Tan, PhD, RPF, results were far better than any of us had expected 94% survival of black spruce planted during the winter. The following winter Global Restoration took the learnings from the trial to the operational stage when over 40,000 trees were planted during the winter on a caribou range restoration project south west of Fort McMurray. Our results in the field were identical to our previous winter’s trial. Since the first black spruce winter trials we’ve added larch to our winter planting programs with much the same results. Winter planting continues to be a valid option on remote sites and has proven to be less costly.

Global Seed Puck and Winter Planting trials can be viewed at the Evergreen Center for Resource Excellence in Grand Prairie Alberta.

The idea for the Rotary Shark Fin came from conversations with Michael Cody @ Cenovus. Michael contacted Global to see if we knew of any automated implement available that could be used on linear features to create plantable micro sites.

There are a number of automated implements used in the forest industry to create micro-sites but all of them create their microsites in rows, none are really designed for restoring linear features in caribou habitat. When restoring linear features for caribou habitat the last thing you want is to create a row, or rows of untreated ground that the animals will then use as a path. 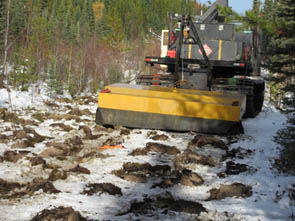 The RSF as we call it was tested on a number of sites for Cenovus in the late fall of 2016, a detailed report is available. All who have seen the machine work are impressed with the speed and quality of the micro-sites it creates. The number of plantable micro-sites per ha during our trial was consistently over 5000.

Other trials that may be of interest Global has participated in are;

All information provided is provided for information purposes only and does not constitute a legal contract between Global Restoration Corp and any person or entity unless otherwise specified. Information is subject to change without prior notice. Although every reasonable effort is made to present current and accurate information, LinkNow™ Media makes no guarantees of any kind.